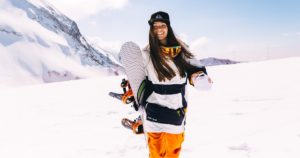 Setting up for a snowboard trip, and trying to decide whether to buy a new snowboard, used, or simply to pick up a rental from the local hire shop? This guide covers everything you need to know about snowboard costs, including some specific examples, and other gear you’re going to need for your trip.

In Summary: How much does snowboarding cost?

Whilst buying a snowboard, bindings and boots separately is an option, you can reduce costs considerably by buying a package deal from a reputable online store.

A typical starter package will be cheaper than buying separately, and these can be found at really good prices here. You’ll be able to pick up a quality snowboard package (snowboard, bindings and boots), for sub $1,000.

Buying a new snowboard isn’t a small investment. So, we’d only suggest buying one if you’re looking to board every year or so, for the foreseeable future. Remember, it’s not just the cost of the snowboard you need to account for. If you plan to fly to a ski resort, it’s likely transport for your snowboard is going to add $30-50 onto your flight cost.

If you’re planning regular trips, the cost of a new snowboard will be well worth it. Hire shops tend to offer cheap boards that are battered to bits, have very little pop or maneuverability. In fact, when I snowboarded in Bulgaria, the hire shop was so busy, one day I had to go on a board that was designed for someone 6 inches smaller than me.

So, how much does a new snowboard cost? Well, a quick flick through the listings on a quality snowboard store like this one here shows a range of snowboard prices. They start as a little as $120, rising to a fairly sizable $1,500.

Realistically, you’ll need to be budgeting somewhere in the range of $300-500 for a half decent board. New snowboard prices that are lower than these either tend to be from sub-par brands, or snowboards for children.

Example? Here’s a great deal on the Salomon Sleepwalker X. The retail price is close to $400, but it’s currently listed here for just over $300, which is a steal on such a quality board.

So, we know we should be budgeting $300-500 as a minimum for a new snowboard, but what about used snowboards?

Digging around classified websites such as eBay, Gear Trade and Craig’s List, you’re going to find boards at around 30-40% discount, in comparison to the retail price. So, used snowboard prices for a board that cost $500 new, is likely to be around $300-350.

The problem? It’s really going to be hit and miss with what you’re actually getting. You’ll either need to request a ton of photos, or want to see the used snowboard up close and personal.

What are you looking for?

Any of the above basically means the board is junk, so you’ll want to avoid at all costs.

For the sake of a small discount, and a snowboard that isn’t going to last as long, we think it makes sense to buy new. There are plenty of cheap snowboards on offer here.

You don’t have to buy a new snowboard, or even buy one used. In fact, if you’re only planning to go boarding a couple of times in the next 10 years, or are trying it out for the first time, there’s no harm in using a snowboard rental company (that’s what I did for the first few trips).

The cost of hiring a snowboard is going to vary significantly. For example, a ski resort in the French Alps is going to be a chunk of change more expensive than one in Bulgaria. And the same is going to apply for lift pass prices too.

In Bulgaria (Bansko), I was paying around $200 per week for snowboard, bindings and boot rental. A helmet was around $20 for the week. I’d expect to pay around double that in a popular ski resort in the Alps, or the USA.

You’ll also need a good selection of gear to keep you warm and stay protected on the slopes, including:

You can get everything you need for your snowboard trip at reasonable prices and from all the best brands here.

How much does it cost to hire a snowboard?

Costs will range depending on the resort. For instance, a cheaper ski resort such as Bansko in Bulgaria could be as little as $15 a day (including boots and bindings), whereas a premium resort in the Alps or USA could be $50 per day and beyond. You will get a discount for multiple days rental.

Should I rent or buy a snowboard?

The typical rule of thumb, is buy a new snowboard if you plan to go every year for the foreseeable future, otherwise, hire the equipment. However, it is worth trying snowboarding a couple of times to determine what you want from your board (pop, maneuverability etc). This will make choosing the perfect board much easier.

Does snowboarding cost less than skiing?

There is very little difference in cost between skiing and snowboarding. A base setup is going to cost in the region of $500-750 (skis, boots and poles, or, snowboard, bindings and boots). And, the cost of lift passes is going to be exactly the same. So, choose the discipline you enjoy the most rather than looking at costs.

Where are the cheapest places to snowboard?

If you’re looking for a cheap snowboard trip, head for Eastern Europe. Places like Bansko (Bulgaria) and Poiana-Brasov (Romania), are some of the cheapest places in the world to snowboard.

How much do snowboard bindings cost?

Snowboard bindings tend to cost in the region of $150-$550, and you can’t use your snowboard without them, so you’ll need to factor in this cost as part of your snowboard package.

How much do snowboard boots cost?

Snowboard boots cost a similar amount to bindings. Expect to pay anywhere from $150-650 for a set of snowboard boots.

Hopefully that clears up how much snowboarding costs, and helps you determine if you need to buy gear, or simply stick to using hire companies.

We’re constantly posting up snowboard guides, so bookmark our homepage and pop back soon.