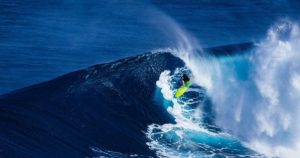 You’ve got your wetsuit, rash guard and an epic board. Now it’s time to surf.

What you don’t want to do is pack up and travel, only to find the surf is flat. Fortunately, there are a ton of useful websites providing life surf reports (sometimes called surfcasts…they’re the same thing), giving you a chance to check out surfing conditions BEFORE you leave your house.

Below, we’re going to cover the best websites to check conditions, and exactly how to read a surf report.

There are dozens of quality websites to check surf reports, some of the best being Magic Seaweed, Surf-forecast.com and Surf Line. They’re all pretty-similar (although some surfcast websites are location specific). So take a look, and see which one you prefer the feel of.

For today’s how-to guide and for consistency’s sake, we’re going to focus on Magic Seaweed surf reports, as that’s what we use.

The first thing you’ll want to check on a surfcast is the swell period.

What’s a swell period? It’s the time between waves passing a certain point. Some surf reports might offer almost perfect conditions, but if the swell period isn’t right, you’re wasting your time.

Generally, you’ll see swell periods of 1-20 seconds. A short swell (under about 5-6 seconds), is going to make it incredibly difficult to get out, and the waves will be too choppy to surf. On the flip side, a long swell (over about 14 seconds) will give you waves that are too powerful to surf, and again, too hard to get out.

When reading a surf report, you’ll want to see swells in the range of 8-12 seconds. That’s easy enough to paddle out past the swell, offers clean waves, but also enough power in those waves for a decent ride.

Next in our guide on how to read a surf report, is checking wave height. Sure, we all want to think we can ride huge waves, but the bigger the wave, the harder it is to ride for all surfers, especially beginners. You’ll have much more fun on smaller, cleaner waves, than some 15ft monsters.

Most surf reports will give an indication of wave height on their surfcast, which will change throughout the day.

Wave height for beginner surfers needs to be relatively small, 2ft to 3ft waves are going to be perfect. There’s enough momentum in the swell to allow you to try turning, but not too much that they’re barrelling or catching you out. For intermediate and expert surfers, they’re generally going to look for 5ft to 6ft waves and bigger.

So what wind direction are you looking for? Put simply, an offshore wind. This helps to create waves that are clean and easy to ride. You don’t want onshore winds, they either flatten the waves, or they make the surf choppy.

Wind speed certainly isn’t as important as wind direction. However, it does help to create the perfect wave. After checking a surf report and seeing offshore winds, you’ll want to also look at the speed.

Typically, a light wind is going to create a clean surf. That’s anything below 6mph, although sometimes up to 10mph can be ok.

Any winds stronger than 10mph start to create choppy waters, or waves that break inconsistently.

Check Which Way Your Beach Faces for Swell Direction

Swell direction on a surf cast indicates the directional travel of waves, and it’s an important part of learning how to read a surf cast; it also helps to determine the best surf spots. First, you’ll need to check which way your beach faces. And, you’ll want the swell direction to match that for the cleanest waves.

For instance, if you surf at a beach facing east, you’ll want a swell direction on a surf report that is also showing an easterly direction.

The final step towards learning how to read a surf report, is checking the tides for your local surf spot. Remember, this will change daily, so check each time you plan to surf.

If you’ve not visited a surf spot before, a general rule of thumb is that waves are best an hour after low tide, or up to an hour before high tide.

However, this isn’t a one size fits all approach. Some surf sports work differently to others because of their consistent swell direction, wind speed and wave height.

Our advice? If you plan to visit a specific surf spot regularly, find a local group on FaceBook. Or, do it the old fashioned way, and simply ask around the local surf shops, as it’s likely they’ve been surfing these waters for years.

And that’s it, our guide covering how to read a surf report.

Hopefully you now understand why it’s important to take into account a few factors covered on surf reports, rather than just wave height.

You’ll be looking for a swell period of around 8-12 seconds, 2-3ft waves for beginners (bigger for experienced surfers), offshore winds of up to 12mph, and a swell direction that matches the direction your local beach faces. And remember to always check tide times, they shift on a daily basis.

What are the best sites to find surf reports?

Taking into account tide only, low tide isn’t the optimum time to surf. For a cleaner break, you should be looking to surf about an hour before the highest tide, and about an hour after low tide.

What are the best conditions and tide to surf in?

Just after low tide, or just before high tide. Typically, you’ll also want to pair this with a mediocre offshore wind, a deep groundswell, and a swell period of around 10 seconds. Anything below 10 seconds and the waves will be choppy, making it hard to surf. Anything longer than 10 seconds and the swell starts to become too powerful to get out.

What surf conditions are the best for beginners?

An offshore wind, just after low tide, or just before high tide. Sets or swell periods of around 10 seconds. More importantly, you’ll want small waves. 2ft and 3 ft waves can be hard to turn on, but they are perfect surfing conditions for beginners that are still learning to pop up and keep control of their board.